educineq is an R package to compute education inequality measures for any group of countries using the dataset developed by Vanesa Jordá and José Manuel Alonso, which covers 142 countries over the period 1970 to 2010. Our estimates rely on a number of assumptions, so we suggest you read this paper carefully before start using the package.

The package offers the possibility to easily compute not only the Gini index, which has been the main indicator used to measure education inequality, but also generalized entropy measures (GE(α)) for different values of the α parameter. This family of inequality measures presents two main advantages:

The next step is to install the package using the following command:

You only have to install the package once, but it has to be loaded into R every time you start RStudio, using the command:

That’s it! The following functions, included in educineq, are already available:

All these functions go with a list of arguments in parenthesis:

As for the mean years of schooling, the option plot = TRUE displays a graph of the previous results:

In the dataset country_data, a classification of the countries by macro-regions is provided, which can me used to specify the countries in all the functions of educineq. As an example, we compute below the level of educational inequality of Latin America and the Caribbean from 1980 to 2000 using the MLD:

If we set countries = “all”, the whole set of countries included in the dataset will be used to calculate the results. We illustrate how to compute the Gini index for all the countries from 1990 to 2000 for female population aged over-25 in the following figure:

We can also use this package to plot the distribution of educational attainment using epdf for the probability density function and ecdf for the cumulative distribution function.

There are a number of ways to specify wrongly each of the arguments of the functions, in which case the package will report an error or a warning message. Some of the most common errors are presented below along with some recommendations to avoid them. 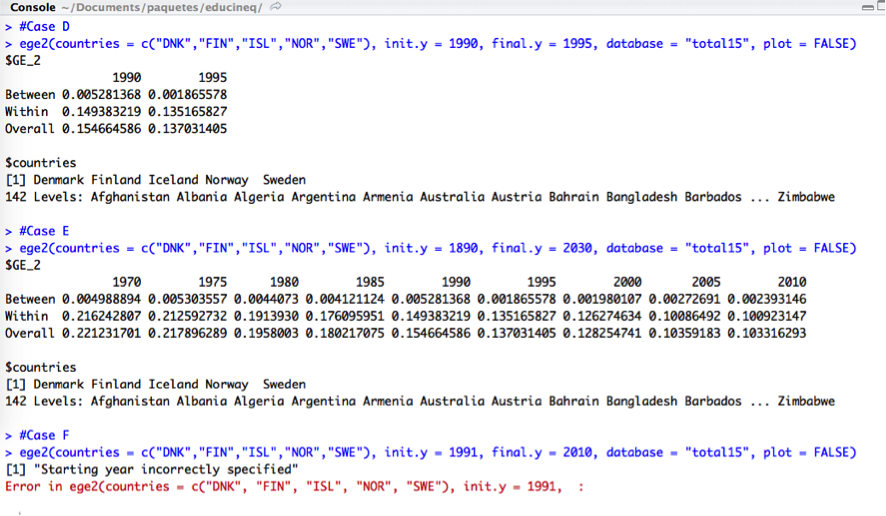 Finally, if the database is not correctly specified, an error will come up, as is illustrated bellow: